What are the 5 most translated languages of Africa?

Africa is home to diverse cultures, nationalities, and religions. The region has a mix of urban and rural populations. Its economy thrives because of the immense opportunities to the global population, mainly because of such diversity.

Nearly 2000 native languages are spoken in Africa alone, roughly more than a quarter of the languages spoken globally!

Understandably, if you are looking to invest in Africa or expand your UK business into the continent, you will surely need professional translation services that can accurately convert the target language to reach your audience. Otherwise, it can become quite challenging to address many local audiences who don’t speak English as a first language, a preferred business language in most parts of the world.

While Africa may be home to a versatile set of beautiful languages and dialects, five languages stand out that are considered the most widely used in the African market.

Therefore, knowing about these languages will allow you to utilise the services of a reputable translation agency more effectively, eventually allowing you to target local audiences adequately. So, what are the five most translated languages in Africa? Let’s find out! 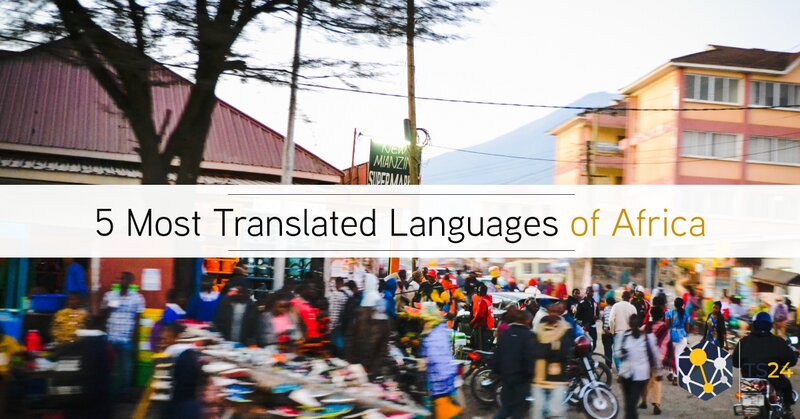 Swahili is probably the most spoken language in Africa, and it’s one of the reasons it’s translated on such a broader scale. In local terms, the language is also known as ‘Bantu’ with nearly 150 million native speakers.

Historians suggest that Swahili is a derivative of the Arabic language, not only this, but it’s also the official language for several African countries such as Tanzania, the Democratic Republic of Congo, Kenya, and Uganda. It is also widely spoken in Sudan, Rwanda, Burundi, Somalia, and the Comoros Islands.

Swahili is also used in schools as a medium of instruction in many countries and is relatively straightforward to learn, especially for those familiar with the Arabic language. It likewise means that Swahili is an essential language for many things such as marketing.

Fun fact – did you know Swahili is the same language used in The Lion King. ‘Simba’ means lion in Swahili.

If you’re not familiar with Zulu, you can easily confuse it with another language, Xhosa. It’s because these two languages are quite similar in vocabulary and phonetics. However, native speakers believe in some fundamental differences between the two languages, each with distinct features.

Amharic is a language predominantly spoken in Ethiopia, a country with more than 20 million people. Statistics suggest that Amharic is second only to Arabic, among the most spoken Semitic languages.

Amharic originated in the 14th century from Hebrew and Tigrinya, two ancient languages that have been widely spoken for centuries in different parts of the world. Members primarily spoke Amharic of the Amhara tribe who lived in Central Ethiopian regions.

When it comes to writing Amharic, there is quite a unique writing system called ‘Fidel.’ It’s written from left to right, just like English. Even though most Amharic speakers live in Ethiopia, it remains one of the most translated African languages.

If you want to learn the Amharic language, you are in for quite a challenge because it has a difficulty rating similar to Greek or Albanian.

It is no surprise that Arabic is a widely spoken language not just in Africa but around the world too. It’s one of the most spoken languages in North Africa. Countries such as Algeria, Egypt, Morocco, Mauritania, Tunisia, Libya, and Eritrea use Arabic or its variants to communicate.

Generally, modern standard Arabic is used for written and verbal communication. Most Arabic speakers use this dialect for writing books and for the different forms of media. Other than that, there is classical Arabic which is mainly used for academics.

Arabic has a lengthy historical background making it the most spoken Semitic language around the world. Since nearly 150 million of the African population speak Arabic, you cannot look past this unique language if you want to set up a business in the region. So, suppose there is a company that wants to expand to northern Africa. In that case, the chances are that they will come across Arabic at some point. Without the assistance of a translation agency with native Arabic translators, communication will be non-existent.

French is arguably the most widely spoken language in Africa. In just this continent alone, 26 different states constitute Francophone Africa. Simply put, these countries use French as the official or second language.

Countries like Mauritius, Côte D’Ivoire, Senegal, Gabon, and Sao Tome and Principe are some of the countries that are known as the French-speaking countries in Africa. Some of the North African countries that speak French include Algeria, Morocco, and Tunisia.

All in all, more than 120 million people in Africa speak French right now. Interestingly, some states suggest that by 2050, 80% of the French-speaking population will come from Africa.

It means that there are higher prospects of success when you use a reputable French translation with the right expertise to communicate with your potential French-speaking African audience.

There are 54 countries in Africa, with many more rural and tribal populations. Therefore, you can expect versatility in terms of culture and languages in this region. However, it presents a unique problem for foreign businesses because you cannot connect to the local audience more effectively without using local languages.

It’s truly remarkable how language barrier is such a hindrance in Africa. However, if you utilise a professional language translation service like TS24, you can easily crack your way into the African market and connect with locals more effectively.